Lion was privileged to host and speak at the Workplace Gender Equality Agency (WGEA) event, “Pay Equity: from pledges to progress”, which marked Equal Pay Day 2018. Following this event, I want to share Lion’s vision for gender equality and outline our journey so far.

Australia’s national pay gap - the difference between women’s and men’s average weekly full-time base salary earnings - is at the lowest level in 20 years. That may sound like good news, but expressed as a percentage, women’s earnings are still 14.6% lower men’s. It means on average, each week, the paychecks of women in full-time employment are $244 lighter than men’s.

Creating gender equality is clearly just the right thing to do. Beyond that, a diverse, inclusive workforce is more engaged, committed and likely to stay. Also, to stay on the right side of disruption, businesses must avoid ‘group think’ and embrace innovation, which requires diversity of thought.

A large body of evidence going back to 2015 shows that diverse companies are more profitable. McKinsey’s latest report on the subject shows that companies in the top 25th percentile for gender diversity on their executive teams were 21% more likely to experience above-average profits. I speak from personal experience, having gone from a Leadership team with no women when I joined Lion to a 50:50 gender balance now, that our speed to innovate has improved due to the diverse perspectives in our team.

Lion began focusing on gender diversity in 2012 and has employed multiple strategies to improve equality since then. While I do not hold us up not as an example of perfection, I believe our experiences are worth sharing, especially for those businesses that are wondering if a pay gap exists in their ranks, and where they should begin to deal with it.

At Lion, we are passionate about fostering a diverse and inclusive workplace and there are three key areas on which we are focused:

1. Close the role to role pay gap, keep it closed:

At Lion, we started with a long hard look at the numbers. In 2016, whilst performing a pay-gap analysis, we found some pay inconsistencies for some of our men and women, but more frequently for women with an average gap of 3.2%. This caught a number of us by surprise. As an organisation that values meritocracy and inclusion, we didn't expect to find anything. So, the pay gap we were then faced with raised some tough conversations internally.

Once we got past the surprise, the next step was pretty clear. We made the decision to immediately close the gap between like-for-like roles, making salary adjustments for the women and men impacted. This action delivered 1,600 employees a $6 million pay rise. All our leaders across Lion were very supportive of the decision, with not a single push back. People are at the heart of our business and although it roughly doubled our pay-rise budget that year, we knew it was the right thing to do and we had to find a way to fund it.

Once we’d identified the pay gap - and made the decision to close it - some challenges were raised, such as communicating to our staff about the findings of the pay gap analysis, plus acknowledging the historical gap. We were up-front in those areas; accepting that as an organisation we’re constantly evolving – and we need our workforce to evolve with us. Overall, our employees appreciated that we were brave enough to challenge our own internal structures and processes, and to take positive action. To keep the gap at zero, we conduct pay analyses every six months, and I’m really pleased to say that we have so far successfully kept the gap closed.

There’s a lot of debate about targets and quotas. But our experience at Lion is that setting clear targets focuses the business on the right policies. Last year, we set ourselves a target to achieve a 50:50 gender balance by 2026. 33.3% of our workforce are currently female and 66.7% are male so we have a long way to go and it takes time but so far we’re ahead of our peers with 27% of manufacturing sector personnel being female and 73% male (ABS). Instituting our target has set in motion multiple strategies that keep equality at the forefront, such as stronger inclusive policies, long-term talent strategies, unconscious bias training, and flexible work options which are attractive to both men and women.

When it comes to influencing how people act toward one another, behavioural science has proved that information doesn’t change behaviour. We have applied this rule of thumb in our approaches to attracting women into the business, which is a vital strand of our 50:50 target. Armed with an understanding of unconscious bias, we have experimented in our recruitment strategies to attract more women by removing detailed lists of requirements in job ads. Our theory was based on the insight that women tend to only apply for roles when they meet all of the criteria, while men tend to apply for roles even if they don't meet all the criteria. Generally, people will self-select out rather than apply for the job and realise they were better than they thought. After three months of testing it out on supply chain roles in New Zealand, we found the number of female applicants had more than tripled, rising from 12 per cent to 37 per cent. We have now rolled out the method across the business and we are also experimenting with including remuneration ranges in job ads because we found women are more likely to apply for those roles.

Our brains are hardwired to make decisions on intuition alone and so our recruitment staff receive unconscious bias training to help them to interview candidates fairly, selecting based on merit. When we do select a candidate, we’re careful not to bring pay gaps of other organisations into Lion. Our People & Culture team make remuneration offers based on market data - not the new hire’s previous or current remuneration.

We can do a lot of work around hiring women, but if they’re leaving at the same rate, then we have a problem. Lion’s high retention levels are due to our commitment to building a culture where women are valued and respected – plus effective succession planning which fosters a strong internal and external pipeline of future gender balanced talent. Since 2017, all new Lion staff are inducted with our Respect at Work policy, which sends a clear message that Lion is an environment where everyone’s contribution counts. Our Diversity & Inclusion, Families at Lion and Lion Flex policies all reinforce that message to our employees. But, tackling gender equality doesn’t stop when employees leave the workplace. Very sadly, nearly one in five women (17% / 1.6 million) have experienced violence by a partner (ABS 2016), compared to 6% of men (547,600 men). Last year, at Lion we uncapped Domestic Violence Leave to support those team members that could find themselves facing that situation.

Closing the gap is not just about raising the numbers of women that we recruit and retain. Critically, we also need to accelerate the development of talented women; providing them with the leadership skills to advance in their careers. Last year, we launched the Women @ Lion career and leadership development program - providing participants with the knowledge, skills and opportunities to become future leaders.

Due to the program, promotions of women to non-managerial positions, including supervisors and team leaders, increased by 8 per cent between 2016 and 2017, rising from 42 per cent to 50 per cent. Women promoted into management positions rose by 3 per cent over the same period to reach 40 per cent.

To be successful, organisations need to reflect the communities they serve. Very few Australian fridges do not contain a Lion product of some kind. So, it’s vital that our workforce reflects the gender diversity of our customers. To achieve that, we are hardwiring gender inclusivity into Lion’s culture in the hope that we can change broader culture, from the inside out. Company culture can be hard to pin down, much less to transform. In our experience there are three key elements:

- Firstly, you need to define your culture – we’ve done this through Lion’s Leadership Principles: ‘Act inclusively’; ‘Create trust’; “Do the right thing”; and “Win together”.

- Secondly, you must continue to measure progress – we do this annually to ensure we are living up to our leadership principles and our culture reflects our purpose and values.

- Thirdly, celebrate success and through your achievement cycle, reward and retain people whose values align to the corporate culture you are building.

In tackling gender equality, business leaders have a real opportunity to define a new cultural reality that starts within their estate, and spirals outwards into society. No one said it would be easy. Dislodging deep-rooted cultural norms takes time and constant attention. It’s vital to undertake a pay gap analysis as what you can measure. When you have the results, think creatively about the strategies that can employed to attack the issue on a number of fronts.

At Lion, we’re making progress. But, we can’t be complacent. Ultimately, we are passionate about fostering a diverse and inclusive workplace at Lion where everyone feels their contribution is respected and valued, not only because it’s simply the right thing to do, but because it makes good business sense. We know that more diverse groups of people make better decisions, and with different perspectives help us focus on the diverse interests of consumers and the wider community.

We’re not taking our eye off gender – we still have a long way to go but another advantage of striving to achieve gender diversity is that it gives rise to best practice that can be replicated in new areas. In this vein, we are taking the experiences and successes from our gender equality strategies and challenging ourselves to push beyond into other areas of inclusion – like culture, disability and age.

This article was first published on LinkedIn. 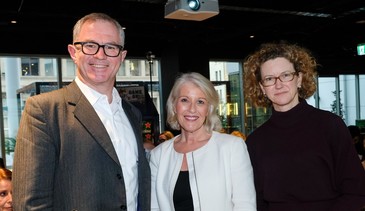